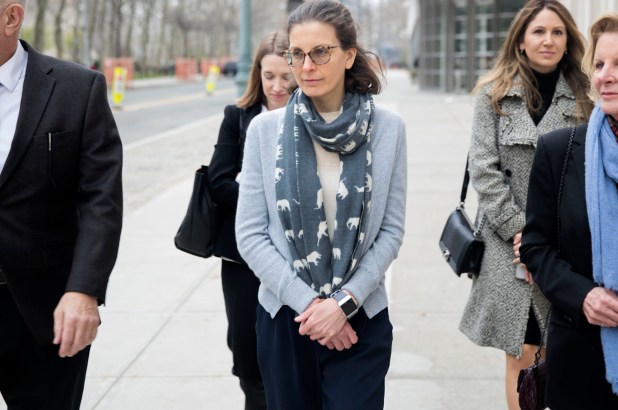 The 41-year-old faces 30 months behind bars under federal sentencing guidelines — but prosecutors are asking for twice that, noting the extreme privilege she came from, not to mention her alleged lack of remorse.

“Bronfman did not commit these crimes out of need,” Brooklyn prosecutors wrote in a blistering sentencing memo earlier this month.

“She is likely one of the most privileged and wealthy defendants to ever appear before this court for sentencing.”

Bronfman pleaded guilty last August to charges of conspiracy to conceal and harbor an illegal alien for financial gain and fraudulent use of identification.

Her time at the side of self-help-guru-turned-sex-trafficker Raniere included her bringing young women into the country illegally, prosecutors have said.

She turned one woman from South Africa into her personal assistant — and would fire off e-mails to her spelling out how to make oatmeal for her dogs, court papers said.

Bronfman, a onetime equestrian, also recruited an aspiring professional horse-rider into Nxivm when the woman was 18.

She was later groomed to perform perverted sex acts for Raniere’s twisted pleasure as part of a secret master-slave group within Nxivm called DOS — and forced to wear a dog collar while performing oral sex on him, according to court testimony.

Bronfman used part of her $210 million fortune — which includes an island in Fiji — to fund Nxivm, as well as threaten Raniere’s victims and foes into silence, prosecutors have alleged.

Bronfman’s lawyers are seeking three years of probation for their client, who has been under house arrest at her luxury city apartment, denying she knew anything about DOS.

Her lawyers, Ron Sullivan and Duncan Levin, wrote that she was never charged with or convicted of sex-trafficking and that prosecutors are “seeking to lay the blame for DOS at [her] feet because she has a large checkbook.”

They also filed court papers Monday noting that she might have a liver disorder.

Several woman testified at Raniere’s trial that they were tricked into joining DOS — handing over damaging “collateral” and then starved, branded like cattle with Raniere’s initials and ordered to have sex with him.

When the “slaves” failed at their duties, they were whipped with a leather slap, forced to hold agonizing poses or subjected to other humiliating punishments, according to trial testimony.

Raniere, 60, was found guilty of charges including racketeering and sex-trafficking last year and faces up to life in prison when sentenced next month.

Bronfman’s lawyers said in court papers that their client still “stands by both the organization and Mr. Raniere for the tremendous good they did for thousands of people.”

But prosecutors fired back, “There can be little doubt that Raniere would not have been able to commit the crimes with which he was convicted were it not for powerful allies like Bronfman.’’

“For years, Bronfman leveraged her colossal wealth to recruit individuals, often women with no legal status in the United States, into NXIVM-affiliated organizations,” the prosecutors wrote.

She continues in her “unwavering support” of Raniere, the feds said.

Mack, who was Raniere’s right-hand woman and served as one of DOS’s masters, has pleaded guilty to racketeering.

Galaxy S20 Ultra drop test: Everything broke, but the camera

Kane Brown Calls on Khalid & Swae Lee for ‘Be Like That’: Listen

admin - September 11, 2020 0
Geeks
(Reuters) - Citigroup Inc C.N named consumer banking head Jane Fraser as its next chief executive on Thursday, making her the first woman to lead a major Wall Street bank.Fraser, 53, has been a rising star in the financial industry, with a career that spans investment banking, wealth management, troubled mortgage workouts and strategy in…